The Large Size Telescope (LST) is one of two classes of telescopes to be featured in the future Northern Site of the Cherenkov Telescope Array (CTA) at the Observatorio del Roque de los Muchachos on the Canary island of La Palma. The prototype of the LST, called LST-1, finished construction and was inaugurated on October 10th, 2018. LST-1 is currently in the commissioning phase to initially ensure that the prototype satisfies the requirements put forth by CTAO and afterwards to improve the telescope's sensitivity and performance. Three more LSTs are planned to be built at the Observatorio del Roques de los Muchachos, finishing construction in mid 2024.

The LST-1 has a 23-meter diameter parabolic reflective surface, which is supported by a tubular structure made of reinforced carbon fiber and aluminum tubes. A reflective surface of 400 m2 collects and focuses the Cherenkov light into the camera, where photomultiplier tubes convert the light in electrical signals that can be processed by dedicated electronics. Although the LST-1 stands 45 meters tall and weighs around 100 tonnes, it is extremely nimble, with the ability to re-position within 20 seconds to capture brief, low-energy gamma-ray signals. The large reflecting surface allows LST to have an unparalleled collection area designed to improve sensitivity at the lowest energies. Additionally, the larger and more sensitive camera comprised of 1855 cutting edge photomultiplier tubes allows LST to detect the small number of Cherenkov photons from low energy gamma rays. The full CTA array will cover gamma-ray energies from 20 GeV to 100 TeV. The design decisions listed above allows for LST to have the dominate sensitivity of CTA between 20 and 150 GeV. Follow the link for further information about LST-1 and CTA.

The LSTs will expand the scientific knowledge to cosmological distances and fainter sources with soft energy spectra. Both the re-positioning speed and the low energy threshold provided by the LSTs are critical for CTA studies of transient gamma-ray sources in our own Galaxy and for the study of active galactic nuclei and gamma-ray bursts at high redshift. The sensitivity of lower energy astrophysical sources allows LST to study sources such as pulsars, supernova remnants, and dark matter.

Current views of the Large Size Telescope prototype and through the Webcams page: 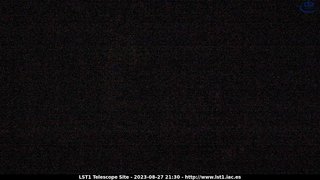 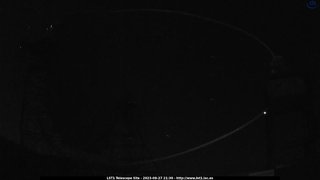 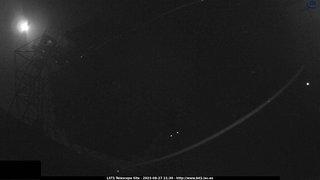 A comprehensive description of the LST project and an updated status can be read here , here, and here

For a full detailed view of the project, check the Technical Design Report here

The official Cherenkov Telescope Array website is hosted at www.cta-observatory.org.