The Instituto de Astrofísica de Canarias wants to extend its solidarity and support to the island of La Palma, to all who are suffering the consequences of the volcanic eruption, and especially to those who had to abandon their homes or have suffered damages to their properties. We share the pain that this has caused them and the wish for the circumstances to change for the better as soon as possible. The authorities and all the institutions involved in the emergency plan have the material and staff resources of the IAC at their disposal for whatever they consider necessary.

The Roque de los Muchachos Observatory, which remains operational, monitors continuously the cloud caused by the volcanic eruption and various indicators of atmospheric properties. The data are available to the scientific community in charge of monitoring the evolution of the volcano.

Due to the presence of ash in the air, telescope operations were shut down on Thursday, September 23, to protect the telescopes' optical systems. However, the ash level is low, and no health risk has been identified, so technical operations continue at the observatory, following at all times the safety measures indicated by the authorities managing the emergency.

The congress "Dark and Quiet Skies for Science and Society II", organised by the IAC, United Nations and the International Astronomical Union, with the collaboration of the institutions of La Palma, and which was to take place on the island between October 3 and 8, will finally be held exclusively online. The organising committee of the congress has been following the evolution of the situation in La Palma closely and, although its initial intention was to go on with the on-site celebration as a show of support for the island, it has taken this decision given the growing need for resources for the island itself. Our primary concern as an institution is that all efforts should now focus on meeting the needs of the island's population and on managing the emergency.

We are deeply grateful for the extraordinary work and continued efforts of all those involved in the operation to assist those affected by this eruption and the continued support provided by the island's authorities to mitigate the situation. We wish them all much strength and courage to face the difficult times we are going through.

We encourage the numerous followers and friends of the IAC and all those who have contacted us asking how they can help the people of La Palma to make their donations in support of the island through the following channels provided by various public administrations:

People who want to donate Bizum must access the 'Send donation' tab and enter the code 03747. In this case, the maximum amount of total daily contributions per person is 2,000 euros, which can be paid in various operations, with a limit of 500 euros per transaction.

When donating, 'Donación volcán' should be indicated in the payment description. If you want to record your help, you can register your NIF/DNI number and business name or name and surname.

People who want to donate through Bizum must access the 'Send donation' tab and enter the code 03749.

People who want to donate through Bizum must access the 'Send donation' tab and enter the code 03748 (La Caixa) or the code 03776 (Cajasiete).

Between January and February 2020, the prototype Large Size Telescope (LST), the LST-1, observed the Crab Pulsar, the rapidly rotating neutron star at the centre of the Crab Nebula. The telescope, which is being commissioned on the CTA-North site on the island of La Palma in the Canary Islands, was conducting engineering runs to verify the telescope performance.

Pulsars are very rapidly rotating and strongly magnetized neutron stars that emit light in the form of two beams, which can be observed from Earth only when passing our line of sight. While detecting the strong and steady emission or outbursts of gamma-ray sources with Imaging Atmospheric Cherenkov Telescopes (IACTs) has become routine, pulsars are much more challenging to detect due to their weak signals and the typical dominance of the foreground gamma-ray signal from the surrounding nebulae. Despite hundreds of observations hours by IACTs around the globe, only four pulsars emitting signals in the very high-energy gamma-ray regime have been discovered, so far. Now that the LST-1 has shown that it can detect the Crab pulsar, it joins the field of telescopes capable of detecting gamma-ray pulsars, validating the timestamping system and the low-energy performance of the telescope. 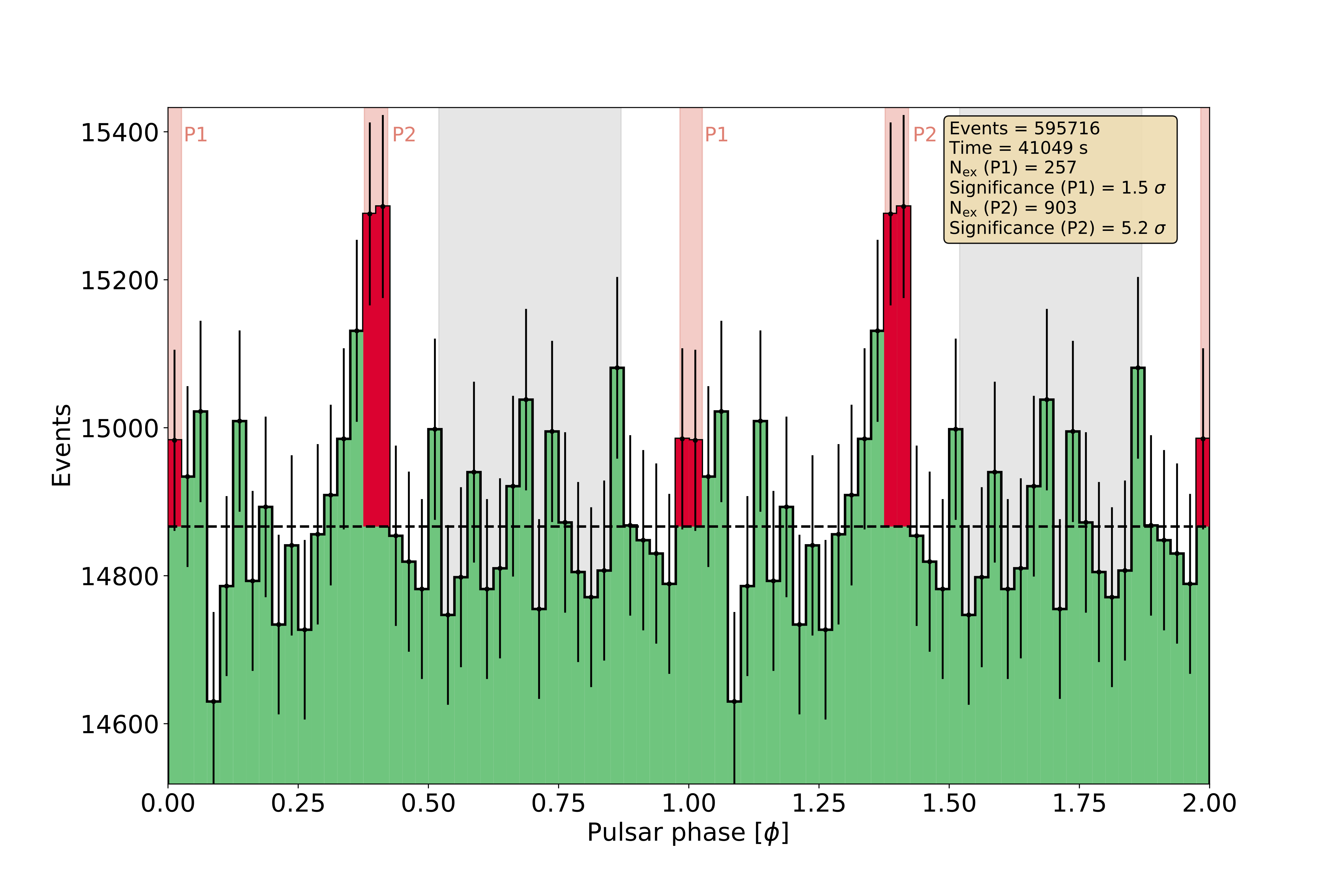 Figure 1: Phasogram of Crab Pulsar as measured by the LST-1. The pulsar is known to emit pulses of gamma rays during phases P1 and P2. The shown significance is calculated considering source emission from those phases (in red) and background events from phases in grey. Credit: LST Collaboration

“This milestone shows us that the LST-1 is already performing at an extraordinary level, detecting a challenging source in record time,” says Masahiro Teshima, Director of Max-Planck-Institute for physics in Munich and Principal Investigator of LST. “Pulsars are one of the key scientific targets of the LSTs, and it’s exciting to imagine what we’ll be able to achieve when the telescope is fully commissioned and operational.”

The data set collected includes 11.4 hours from eight observation nights. Figure 1 shows the resulting phasogram, plotting the gamma-ray events as a function of the pulsar rotation phase. In the phase regions marked as P1 and P2, more gamma rays are expected as the Crab pulsar emits towards the Earth. The emission detected in all phases (marked green in Figure 1) is a mixture of different background contributions, including the irreducible steady emission from the Crab Nebula. The signal detected with the LST-1 (marked red in Figure 1) is undeniably significant for phase P2, while the signal during P1 is still marginal. The animation in Figure 2 highlights the pulse behaviour of the source during the different phases.

Further information about the Crab Pulsar detection can be found below: